Shock and Awe – The Monsters We Love (II) 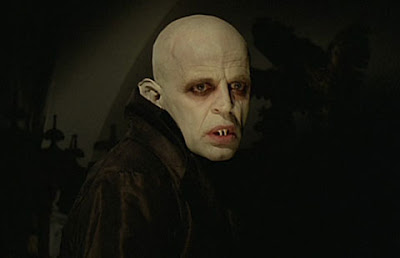 Dracula has gotten a bad rap recently, along with vampires in general, but to me he is one the greatest monsters. What makes or breaks Dracula is the way he is portrayed. Sadly, it is very easy to mess up Dracula, turning him into this cheesy villain who lusts after busty women and speaks with a lisp. But there are times when the stars align and he’s represented in all of his complex glory. To me, the greatest portrayal is the 1979 film Nosferatu The Vampyre by Werner Herzog, starring Klaus Kinski as Dracula. The film was intended to honour the classic 1922 Nosferatu, but I think it eclipses the original. The silent film will always be eerie because of the lack of voices, but the way Dracula speaks in the 1979 film is a huge part of why I love the character.

Dracula’s look is almost perfect: he’s white as a ghost, dressed in a flowing black cloak, and he literally never blinks once during the entire film. No frills, no red, no pompous hairstyle. His movements swing wildly between apparent frailty and bestial strength. The very first appearance of him is absolutely amazing. He is sluggish in his movements, almost timid. However, as soon as he has the scent of blood, he violently throws aside a chair to get closer to his prey. I think this is the heart of how Dracula should be played – he is almost two different creatures, caught between them.
The first side of Dracula is the quiet, sorrowful side. He’s a cursed being, doomed to live his nights alone. Nobody knows how long Dracula has been alive. A key moment during the film reveals the inner torment of this monster, all delivered in Klaus Kinski’s frail, sad voice.

“Time is an abyss, profound as a thousand nights. Centuries come and go. To be unable to grow old is terrible. That is not the worst, there are things more horrible than that. Can you imagine enduring centuries, experiencing each day, the same futile things?”

The other side of him is that of a predator. Many different stories have attempted to paint vampires as an evolution of humanity, or at least connected somehow. This is not so in Nosferatu The Vampyre. It’s clear that Dracula sees himself as completely separate from humans, identifying more closely with animals. When he hears the howling of the wolves, he tells Jonathan “Listen. Listen. The children of the night make their music.” When Jonathan doesn’t respond, Dracula laments his confusion. He says “You are like the villagers, who cannot place themselves in the soul of a hunter.”

Like I said before, Dracula is a character with two sides: the cursed being and the monstrous hunter. Exploring both of these aspects of Dracula is what makes him such an interesting and terrifying monster, and definitely one of my favourites.

It should be obvious by now that I love Cthulhu. He is such a great monster. Not only is Cthulhu one of the central monsters of H.P. Lovecraft's mythos, which I love from a fiction standpoint, Cthulhu has also been adopted into many areas I also enjoy. Cthulhu appears in video games and even movies from time to time. Then again, most monsters have appeared in these mediums. However, Cthulhu is also huge in metal music. There are many songs and even bands dedicated to the Cthulhu Mythos. The band The Great Old Ones is one of my favourites!

But why has Cthulhu captured our hearts? Simple! Let's just check off the things that makes a cool monster.

In short, he is a titanic monster that sleeps beneath the black waters only to surface without warning and run amok. You simply cannot beat Cthulhu for style points. It seems like he has everything that would make him extremely likable as a monster concept, which is surprising when you consider he was created almost 100 years ago. Cthulhu has the same kind of appeal that a monster like Godzilla has, but he is more ancient, more mysterious, and adds the whole cosmic horror aspect, which I personally find to be one of the best types of horror out there. The sense that human beings are motes of dust in an infinity large and vastly dangerous universe is the modern horror concept, and I wish it would be tackled by popular media more often. But for now, we always have Cthulhu.

The Thing is an amazing monster that might not be as appreciated these days due to the fact that the concept is quite familiar to modern pop culture. The Thing might not even be the original version of this monster, but to me, it's the best.

The Thing is the titular monster from 1980s The Thing, a film by John Carpenter. The film takes place in Antarctica, making it an even more secluded vista than usual. A research group stumbles upon the monster, but The Thing has apparently been frozen on Earth for ten thousand years.

The Thing is an alien being, crashed and stranded here. Its powers are truly terrifying. The Thing can replicate any being that it comes into contact with, killing and taking the place of any human or animal it wants. In fact, we never get to see what the actual "Thing" looks like, because the first time we encounter it, it is in the form of a normal looking dog. To make it even worse, The Thing seems to be able to mimic multiple people at once, or at least, multiple "Things" can exist at the same time. Is it the same Thing, or is it two separate beings each with its own consciousness? We just do not know.

This is the greatest part about The Thing, and why I think it is such a powerful, terrifying monster: we know nothing about it. We don't know what it actually looks like (Did it ever have an original form? Maybe it was a microscopic virus at the start?), we have no idea what it wants or what its purpose is, and we cannot detect it without drastic measures (Care to light your blood on fire to test?).
This completely mysterious aspect of The Thing makes it one of the best monsters. You can't detect it, you can't reason with it, and you seemingly can't kill it. Other monsters that have used this same idea, for example the T1000 from Terminator 2, can't compete with The Thing. T1000, while powerful and terrifying, had a mission. You know what it wants, and thus can take steps against it. Nobody knows what The Thing wants. 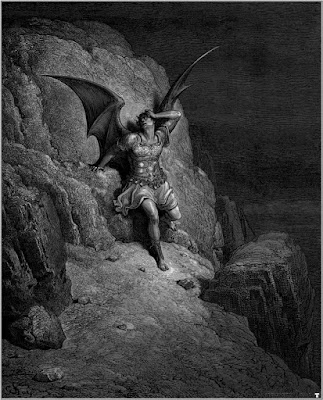 This one might strike some as an odd choice for Best Monsters, but that is exactly what he is: a monster! In fact, Satan is (probably) the oldest individual Monster that is still firmly lodged into human consciousness. Sure, there are always older monsters, like some of the Greek terrors or ancient Chinese demons, but they are stuck in the realm of mythology. Satan not only still terrifies religious children, he also appears in all kinds of media. He's in books, he's in movies, he's on TV, he is everywhere.

As a listener of tons of metal bands, Satan is one of the most favoured topics among lyricists. Whether he is trotted out simply to frighten parents and give off a grim vibe, or he is actively being praised as the antithesis of all that is holy, Satan is a potent image.

One of the best things about Satan is how versatile he is as a concept. To boil Satan down to his original concept, he is the Incarnation of Evil. That's pretty crazy to think about. Anything that can be called morally wrong, Satan is all about. Think about all the awful things that happen on a daily basis; all of this suffering could be laid at the feet of Satan. Who knows? Maybe he is responsible for it.

But then there are the other understandings of Satan. Some treat him as a tragic hero whose pride caused his fall. Still others treat Satan as a boogeyman, some half-goat beast who wanders around at night drinking blood and conducting rituals. I could go on and on. A monster as classic as Satan has been reimagined so many times it's sometimes difficult to remember that his original purpose is to be the ying to God's yang, so to speak. And for me, even a simple concept like that is enough to make him one of my favourite monsters.

So there we have my favourite monsters. If you're still in the mood for more monsters, check out Annie's post for Part I.
If that still isn't enough monsters for you, then check under your bed. You never know...
Posted by Jayson at 7:32 am

Add comment
Load more...
Older Post Home
Subscribe to: Post Comments (Atom)
In case you’re wondering...
Cory, Norah, Fifi, Stars are the names of our imaginary friends.
Coryno rah fif istars, if spoken correctly, will unleash demons from a hidden portal in the lost city of Jun-K’zan.
C 0R YN0 RAHF 1F1 5TAR 5 is a mysterious code found at the end of every report sent from Nasa’s Voyager 1 from Apr 10, 1979 to Oct 13, 1987.
CORY-NORAH-FIFI-STARS is an anagram for Sci-Fi Horror Fantasy.