Shock and Awe – The Monsters We Love (I)

The nights are getting longer, and the trees have dropped their vibrant façade of summer and revealed a more sinister silhouette.  Creeping shadows abound in the chilling wind.  This is the season for the dark and the damned, the creatures of nightmares.

For the most part, monsters are ugly, loathsome things that are hard to kill and hell bent on killing us.  The disgusting ones are plain enough to see, so there is no need to have a beauty contest here.  This article is devoted to the more evolved ones, those who are more than simply inciting raw fear.  They are the ones who have continued to haunt and mesmerize me long after the nightmare is over. 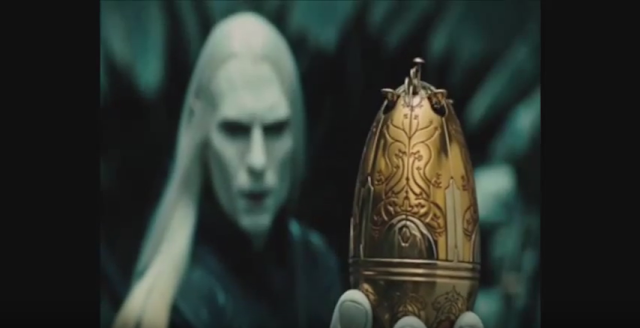 The creature unleashed by Prince Nuada like a Pokemon from a golden egg is the last of his kind.  Kept inside the gilded vessel, the monster has the shape and size of a seed pod in his inchoate form.  Once freed, he finds water and grows into a green tentacular giant that towers over buildings.  The Elemental Forest God in Hellboy II is an angry god.

Whipping his strong rubbery limbs, he smashes buildings, destroys vehicles and kills with abandon in retaliation for the never-ending replacement of jungles with concrete.

Inevitably, this green giant is killed.  As the creature lies dying, his body melts onto the building where he rests and turns the urban landscape into a grassy slope complete with flowers blossoming.  His death is utterly beautiful and defiant.  Every last molecule in him seeks to return the manmade world to its natural origin.  I have never felt so sad and guilty seeing a monster perish than to witness this creature’s passing. 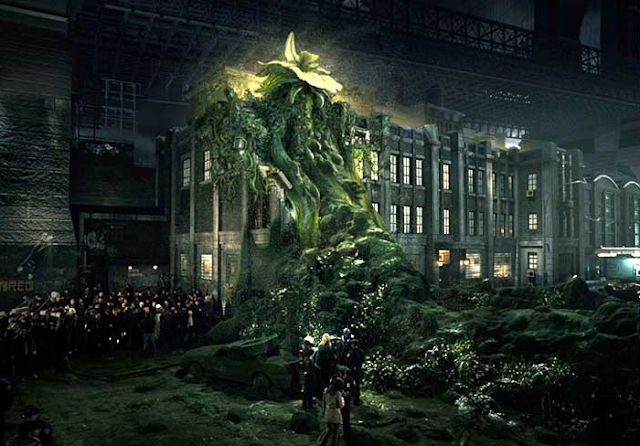 The scariest part about the Elemental Forest God is not his appearance or powers, but his death.  His defeat is a frightening reminder of the immense collective power we have as humans for destruction. 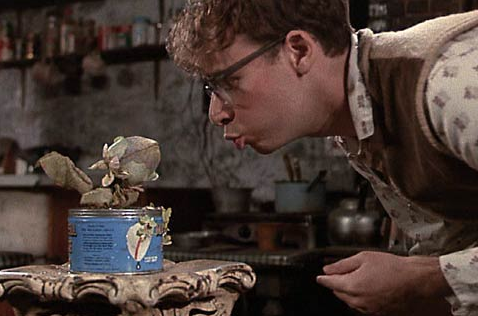 Ah, Audrey II, the genie in a flower pot that promises to make your wishes come true.  All he needs is blood.

Until Seymour pricks his finger by accident, he has no idea how to keep Audrey II alive.  Water doesn’t help, neither does fertilizer.  As soon as the plant tastes blood, however, he blossoms.  Out of pity, Seymour begins to feed the plant regularly with his own blood.  As Audrey II grows, his demand for the sanguine feast becomes increasingly aggressive.  When Seymour turns uncooperative, the botanical devil lures him with promises of making all his dreams come true, including a life with Audrey, the girl of Seymour’s dream.  Unable to overcome the plant’s cunning schemes, both Seymour and his girlfriend Audrey end up being eaten by the monster.

Audrey II is toxic relationship personified.  Like all toxic relationships, our participation is essential, and we feed them with our life while they lasso us with dreams and illusions.  Unlike monsters that chase and kill, Audrey II is stuck in a pot.  His life is completely dependent on the sacrifice of willing victims, and yet, he emerges triumphant.  Not only does he thrive, he has people making cuttings of his new buds for taking back to their homes.

Audrey II sucks blood, but we are suckers for illusions and glamour.

Tired of being chased and mauled to death by monsters with all things sharp and pointy?  You may prefer the hypnotic wings of the Slake Moths which dazzle you with their endlessly psychedelic patterns.  These life-sized Moths will happily keep you entranced during their attack.  When they are done with you, they won’t leave you dead, just catatonic.

The Slake Moths are one of the many kinds of unique creatures found in China Mieville’s Perdido Street Station.  Mieville’s other creations in the book include an artist with an insect head and the re-formed prisoners turned disgraceful cyborgs.  Compared to them, the Slake Moths are still more inventive, and having those wings is just one of the reasons they are such incredible monsters.

First, they don’t want your flesh or your blood.  When they stick their five feet long proboscis into your mouth, they find your brain and drain your dreams.  After your wild thoughts and fantasies have coursed through their digestive tracts, they will be excreted as dreamshit – an expensive drug popular among the inhabitants of New Crobuzon, the city where Perdido Street Station takes place.  Through the Slake Moths, dreams are stolen and repurposed as a commodity.

Second, they fight to be queen.  When the Moths mature, they battle each other for the right to be female.  Only the strongest one is allowed to have her female organs fully formed and ready for conception. 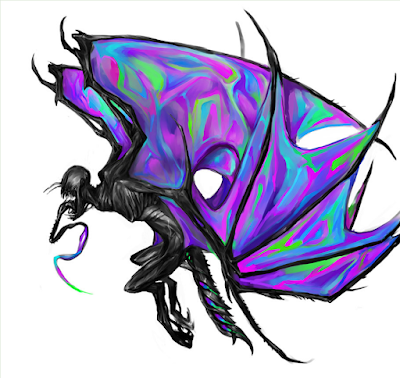 Finally, just look at their wings.  Their ability to mesmerize gives the Slake Moths a Medusa quality.  In both cases, making direct eye contact with them and you are as good as dead.  Like Medusa, the Moths are ugly as hell.  Their wings however, are beautiful enough to stun.

They might be just insects, but the Slake Moths emerge as monsters with a most sophisticated palate.  They only want the most precious thing you have: your dreams and aspirations.

The Mirror in Oculus

In the movie, mirrors don’t just shape the way we see ourselves, the cursed mirror in question dictates what we see.  The movie Oculus is a study of this ironic relationship we have with our sight.  We use it to understand the world around us, and yet, how much of what we see is falsehood and illusion?   If our vision can fool us, how close are we to the precipice of danger before the free fall?

In Oculus, Kaylie was a child when her parents died in bizarre circumstances.  She believes the mirror that her dad had brought into the house was the cause of the tragedy.  More than a decade later, she uses her work connections to find and acquire the cursed mirror.  Her plan is to prove the mirror’s role in her parents’ death by recording how it works to confuse people.  After that, she will see it shattered.

Her elaborate arrangement and safety measures turn out to be useless.  In the presence of the mirror, she and her brother see what it wants them to see.  Amidst the hallucinations, her brother ends up killing Kaylie, thinking he is smashing the mirror. 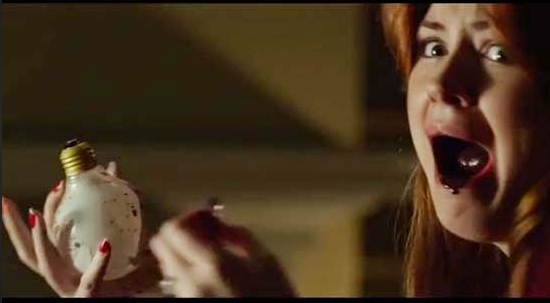 This evil looking glass joins its famous counterparts such as H.A.L. in the movie 2001: A Space Odyssey and the One Ring in Lord of the Rings in this elite group of inanimate objects capable of unleashing extreme terror.  Instead of afflicting direct bodily harm, these objects attack our most hidden and vulnerable part: our minds.  In all of these cases, the results are horrifying.

Xenomorph from the Alien movie series 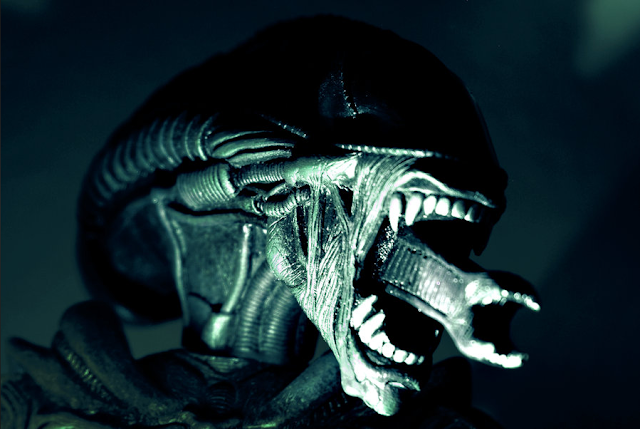 We all know about the pitch-black monster with the elongated head, and we love it.  It’s intelligent, it’s fast, and it has two jaws, one inside the other.  Even his drool is caustic enough to burn through metal.  This thing is terrifying as hell.

Designed by H. R. Giger, famous for his erotic, often phallic creations, the xenomorph is perhaps one the best examples of portraying male sexual power as monster.  Everything from his penial head to his double-jaw thrusts dripping with corrosive spit, the creature screams male sexuality.  His victims are used as either food or vessels for impregnation.   In a twisted, surreal way, he is perhaps the male sexual vehicle manifested at its most primal and perverse essence.  Interestingly, the one person the xenomorph dances with is the woman who doesn’t cower in his presence.  His relationship with Ripley is not unlike that of Rhett and Scarlett’s in Gone with the Wind.  It’s the kind of feisty love story that never gets old, never dies.

If monsters personify our fears, we love them because we want to embrace the dark corners of our mind, the secretive parts, the dangerous parts we cannot and will not share with others.

Who are your favourite monsters?  And what do they say about you?