Your Guide to Must-Read Fantasy Trilogies


This is a follow-up article to my previous Epic Fantasy Series. First of all, a big thank-you to everyone who has read and commented on the post. Quite a number of you have asked for a list of favourite trilogies, so here it is.
Before we get to the list however, let me clarify a couple things.  First, I have decided to cut this guide short at 9 entries instead of the standard 10. Among the series I have read, there is simply none that could occupy the tenth spot. And second, before you ask, no, I do not want to put in Lord of the Rings. Everyone knows Lord of the Rings. JRR Tolkien wrote the story as a single book, and turning it into three was a publisher’s decision for commercial reasons.  Its status as a trilogy is tenuous.
This list below is organized from the oldest to the newest trilogies, and the last few entries are incomplete series at the time of writing.
Finally, the fantasy trilogies discussed here must fit the following criteria: 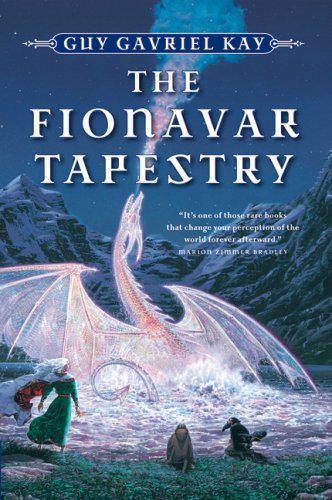 The Fionavar Tapestry is one of the first trilogies I have ever read and it holds a very special place in my heart. It is one of Guy Gavriel Kay’s earlier novels and a large departure from his normal work, which is historical fantasy. The Fionavar Tapestry is high fantasy, drawing inspiration from classic characters including King Arthur, Lancelot and Guinevere. The story follows five young adults as they are transported to Fionavar, a world thrown into chaos by Rakoth, the Unraveller.  Upon discovery of their true identities, our protagonists plot against Rakoth in an attempt to save Fionavar. The best thing about Kay’s writing is his poetic phrasing and his emotional punch. Even if you use this as a gateway to his other writings, The Fionavar Tapestry is worth your time. 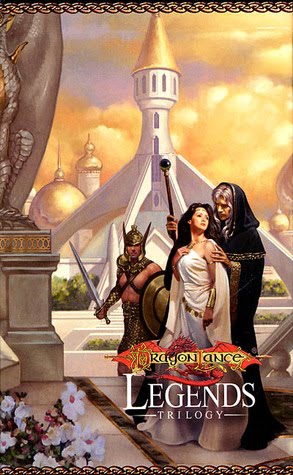 
Margaret Weis and Tracy Hickman are staples of the fantasy genre, having a large hand in creating the Dragonlance Series.  They have written standalone works, such as the Deathgate Cycle, that are considered classics as well. If you want to break into the world of Dragonlance, there is no better place to start than the Legends Trilogy, a story about the rift that grows between a pair of twins: Raistlin the sorcerer and Caramon the warrior.  Raistlin is forever in search of more power, and his hunger leads him down a dark path. Caramon is called upon to rein his brother in and their battle rages across different times and places.  At one point, Raistlin even attempts to kill a god and usurp her throne.  Legends is widely considered to be one of the best Dragonlance trilogies. 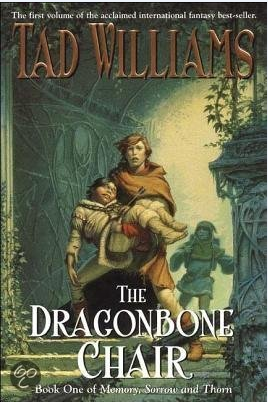 
Tad Williams is known for several different series, but my personal favourite has always been Memory, Sorrow, and Thorn. Following a young boy named Simon, the story catalogues his journeys through life, where he eventually finds service under a rebel prince and helps him battle against the dreaded Storm King. The strength of the story lies in its central character Simon. We follow him as a child, through his teenage years, until finally he is an adult in the third novel. Watching Simon grow in his power and position is very rewarding, and it ties together the whole series very well. 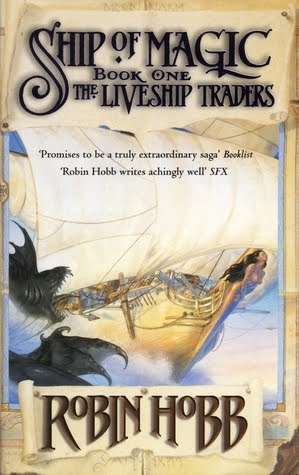 Robin Hobb has written many trilogies, including the very popular Farseer Trilogy. However, for my pick, it is the Liveship Traders Trilogy. Character development is outstanding in this series, and Hobb has a true talent for creating characters that are well-rounded and convincing. Her ability to portray the internal struggles of a family is what truly sets this series apart.


The story follows the Vestrit family, whose careful plans are thrown into chaos when the father dies at an unexpectedly young age.  All of a sudden, the burden of the Vestrits’ survival rests on the shoulders of the daughters who, as prompted by their mother, are forced to make difficult decisions about their lives.  The less experienced of the two siblings is given rein of the family business simply because she is married.  Her adventurous sister has to give up her dream to be a sailor and pursue marriage.  These changes in their lives create a massive rift that threatens to pull the women apart, resulting in the poignant, heartbreaking family strife that Hobb writes so well. 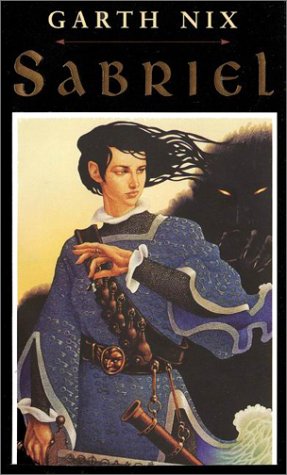 The very first fantasy novel I had ever read was Sabriel, the first in the Old Kingdom trilogy. It opened my eyes to a world I never knew could exist. Having one of the most inventive settings out there, Sabriel follows a young woman on a quest to save her father, the Abhorsen, a necromancer with the duty to keep the undead where they belong.  With him imprisoned and the ghastly creatures threatening to burst through the gates of Death, Sabriel bravely assumes the dreaded role and carries the seven bells designed to bind and banish the undead.  Her only ally is a cunning monster precariously tamed by a tiny bell around his neck.


The system with which Garth Nix develops and organizes magic is unique, and the story is immensely enjoyable. I cannot recommend Sabriel enough; the coming-of-age story of her apprenticeship as the Abhorsen is perfect for young adults and teenagers.  Although she is not the protagonist in the last two novels of the trilogy, Sabriel remains in the series throughout, collaborating with others in her extended family against the evil powers in the Old Kingdom.  Readers young and old should find much excitement in these novels. 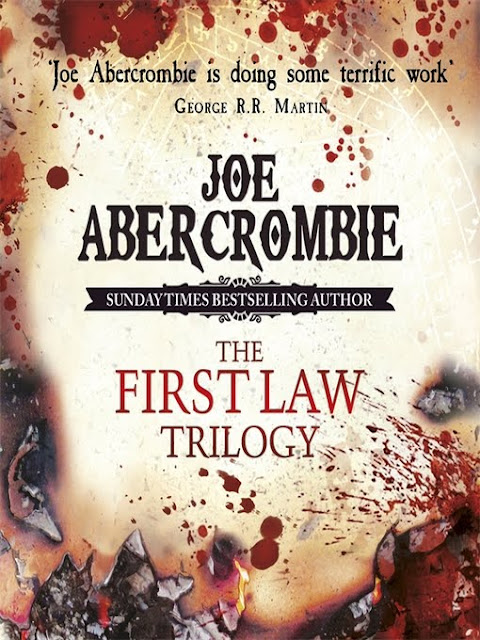 As we move forward in time, our novels take a turn for the dark. Joe Abercrombie is considered one of the best writers of dark fantasy right now, and for good reasons. The worlds he paints are dark and brutal, full of despicable characters. However, Abercrombie throws in enough dark humor and writes his characters so well that you want them to succeed in their quests. The First Law trilogy follows a pack of grim heroes as they attempt to fight against the invasion that threatens to crush the Union, both from the Vikings in the North and the Empire in the South. What is really important here is Abercrombie’s ability to write characters that are so morally ambiguous, sometimes pure evil, and yet he somehow makes you love them and cheer for them on every step of the way. The trilogy also opens up the world to several stand-alone novels that are also very good. 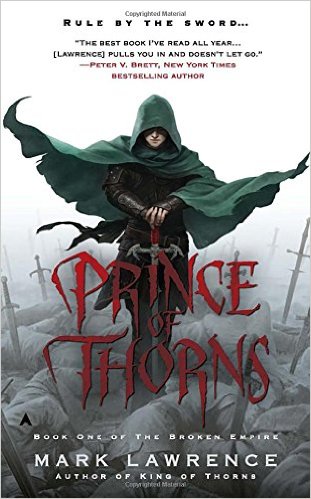 I think when Mark Lawrence set out to write the Broken Empire trilogy, he thought “how can I take all of the clichés about good characters and invert them?” The story follows young Jorg, a boy who suffers the death of his mother and brother at the hands of his father, the King of Ancrath. Instead of seeking the resolution of his inner demons, Jorg turns his pain into anger and ambition. By the time he is fifteen, he is ready to kill his father and claim his throne. This series is dark, and you are hard pressed to believe what our protagonist is doing is right. However, Mark Lawrence keeps the story galloping forward and you are swept up in the rush. It’s a great novel for those who are tired of the hero who can do no wrong. 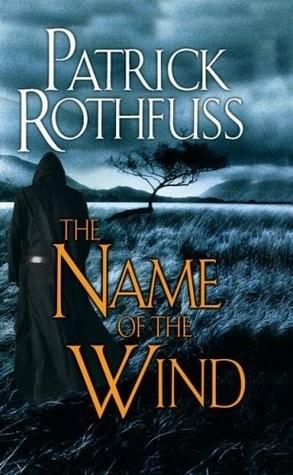 Speaking of a hero who can do no wrong, the final trilogy in this list is the epitome of this concept. The Kingkiller Chronicles is the tale of young Kvothe, a famous adventurer known throughout the land as the Kingkiller. However, the retelling of Kvothe’s youth is done by none other than Kvothe himself, known to others as simply an innkeeper. This mechanic is very intriguing, because Kvothe claims that he will not embellish his life as others have, and then proceeds to tell a story about a boy so talented and amazing that he literally succeeds at everything. Pat Rothfuss has done an extremely good job of combining elements of Harry Potter (notably the schoolboy learning magic part) with enough foreign and more adult elements that it becomes a whole new story. Immensely enjoyable and utterly irresistible, you cannot help but love every moment of Kvothe breezing his way through his tumultuous yet eventful life. 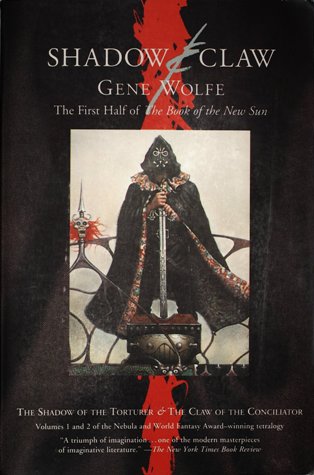 Book of the New Sun

The Book of the New Sun by Gene Wolfe is something I feel I have to include in this list. While it is not a trilogy (it is 4 novels, and the edition I read was combined into 2 books), it deserves special mention. The novels are short enough that it should take just as long to read as a trilogy.  It is a series that everyone should at least try.


The story follows a young man, Severian, who is raised to be a torturer and executioner, but is expelled and sent into exile by allowing a prisoner to commit suicide rather than be tortured. The story follows his journey to find a new home. Told from a first-person perspective, the concept of the unreliable narrator is always looming. Every so often, the things he describes are so fantastical you are not sure if they are real or if he is hallucinating. For those who are willing to read a novel that challenges you, the Book of the New Sun is enthralling. Severian’s journeys are mystifying, amusing, terrifying, and heartbreaking. There are scenes you cannot find elsewhere, including a hilariously misguided morality play, a rescue by time travelling robots, a visit from aliens, and more unexpected twists than anything else I have read.


The Book of the New Sun is high fantasy on acid.  I have thoroughly enjoyed this series, even though I cannot claim to understand one single moment of it, and that is what makes it so very unique and entertaining

Thus concludes my list of favourite trilogies. There are a few series that could have made this list if they stuck in my mind a bit more, and some titles have to be left off due to their not being in the right format. For example, the three novels in Django Wexler’s Shadow Campaign series are some of my favourite reads recently. I have just discovered that two more novels will be added to the series, which is exciting. However, it makes the series unfit for this list, which is unfortunate. So, I leave it to you, my readers, to point me in the direction of a contender for occupying this coveted 10th spot. I look forward to reading your recommendations.