I first encountered Usagi Yojimbo when I was a young boy. My father let me buy any comic I wanted, and my eyes landed on a rabbit holding a sword. How could I resist? But after that fleeting moment, I forgot all about Usagi and his adventures. Children lose focus so quickly. In fact, I didn’t think about or even remember the existence of Usagi Yojimbo until just last year, when Darkhorse started publishing the Usagi Yojimbo Saga, large omnibus collections of the stories. I was browsing a website much like this one and I stumbled across the cover of Book 1. 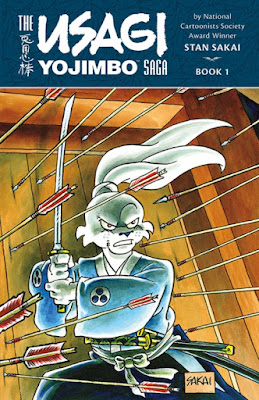 With that one image of a rabbit holding a sword, memories came flooding back to me. Remembering how excited I was by the concept of this comic, I immediately found a copy of it to relive those memories. But of course, I am not a child anymore, and attempting to revive a feeling from so long ago more often than not leads to disappointment.
However, to my great joy, Stan Sakai’s Usaji Yojimbo is not some gimmicky rag meant to draw in young boys. Instead, it is a great piece of art and story telling, fusing together elements from historical sources, classic samurai films, and Japanese Folklore. When I was a child; none of these things meant anything to me. Now, as an adult, I have read Miyamoto Mushashi’s Book of Five Rings, watched Akira Kurosawa’s Seven Samurai and Yojimbo, and studied Japanese mythology. I am familiar with much of what Stan Sakai brings to his work, and the way he fuses these elements together into a unique story about a rabbit with a sword is amazing.

While there is plenty for a child to enjoy in Usagi Yojimbo, including the sense of adventure and wanderlust that Usagi holds in his heart, what really impresses me time and time again is the maturity of the writing. More often than not, characters put into the samurai role will have an overwhelming sense of honor, refusing to kill and slipping into an unrealistic caricature. Stan, on the other hand, respects the time period and doesn’t shy away from Usagi cutting down bandits who seek to steal his purse. There are moments of intense depth, like when a woman, a central character to the story, is stabbed and killed while attempting to protect her child. Stan does not pull his punches in a misguided attempt for a happy ending. He instead presents the time period as it was; brutal and dangerous. These moments transcend the medium and are truly great storytelling. 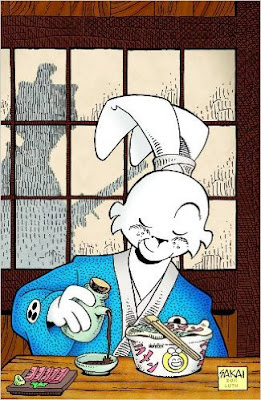 But what I love most about Usagi Yojimbo is its use of traditional Japanese Folklore. From its characters to its settings, Stan is always incorporating Folklore elements. He has touched on grand tales like the creation of the island of Japan, and focused in on small beliefs like a stone guardian that watches over the spirits of the dead. One of my favourite techniques when writing in a specific time period is to incorporate the traditional Folklore of the time in to the story. Another author I adore, Guy Gavriel Kay, does the same and it is always effective. It adds a legitimacy and realism to any period piece, and furthermore, it respects the people who lived then.

Too often people want to pretend that mythology is just that: a myth. But the people of feudal Japan believed these stories and their daily lives were informed by their myths. They did not forget that the world is more vast and mysterious than they could imagine, and neither should we. Usagi Yojimbo continues to capture my imagination all these years later, and I highly recommend it to anyone.