In the previous article, I have discussed one of the most feared monsters in the sci-fi/fantasy genre.

Cthulhu, with his brute physique and strength and superhuman intelligence, is a formidable force in the world of H.P. Lovecraft. Are physical power and intelligence a most fearful combination for a monster? Let’s take a look at other famous villains. 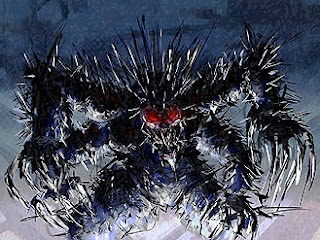 As seen in The Hyperion Cantos by Dan Simmons

The Shrike is perhaps one of the most villainous creatures I can think of, with an appearance from our worst nightmares. It is unclear whether or not he is human, machine, or some cruel combination of the two. In The Hyperion Cantos, he is described as …


A face part steel, part chrome, and part skull, teeth like a mechanized wolf’s crossed with a steam shovel, eyes like ruby lasers burning through blood-filled gems, forehead penetrate by a curved spike-blade rising thirty centimeters from a quicksilver skull, and a neck ringed with similar thorns.


This metal being has incredible power, including what is essentially control over time itself. He is able to move at super speeds, teleport from one place to another, and travel through time as it pleases. Perhaps the most horrifying part is his ability to call himself from another time frame into the present. While The Shrike can and has been destroyed, he will simply travel in from another time, and then duplicate itself from all other times. Similar to Cthulhu, it strikes such fear into the hearts of man that it is worshipped as a god by the Church of the Final Atonement, who has named him The Lord of Pain.

The novel makes it clear that we do not know what The Shrike’s purposes are by way of his introduction. Our first encounter with The Shrike is when he helps the soldier Kassad destroy an invading army. As a silent ally, the creature helps kill thousands of Kassad’s enemies. Immediately after this, however, The Shrike appears as the murderous monster in the poet Silenus’s world, cutting down random citizens, scattering their body parts to be discovered later. Occasionally, he will spare the person’s life by impaling it upon one of the spiked branches of his own Tree of Pain, where they will continue to live in agony for eternity. The reasons for his murders and tortures are completely unknown and never revealed.

This mystery about The Shrike is what makes him such a fearful villain. He could be helping you one moment and killing you the next, his actions never explained. His ability to control time amplifies everything that is frightening about him. Surely, it can accomplish anything it wants, but what does he want? The Shrike is a voiceless being, and his motivations are never shared. He is a monster of pure carnage, a negative force in the world, and one of the greatest villains ever created in fantasy literature. 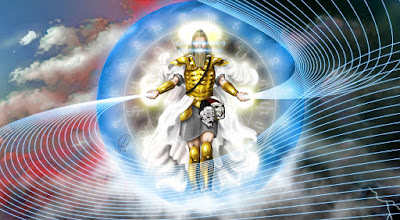 As seen in The Prince of Nothing series by R. Scott Bakker

Anasûrimbor Kellhus (Kellhus) might appear to be different from the two previous villains we’ve looked at, but he is no less horrid. While The Shrike is an alien being, Kellhus is a man who has evolved into a monster. Unlike The Shrike who is voiceless, Kellhus is the narrator of his tale, but make no mistake. He is not an ambiguous villain.

In the series, Kellhus is a prodigy of a clan devoted to perfecting humans in every way. To that end, they have selectively bred themselves over two thousand years to transcend beyond humanity. He can access the thoughts and feelings, desires and hatreds of all human beings. His grasp of magic is far superior to even the greatest of human wizards, and none can challenge him. However, rather than treating his fellow humans with compassion, Kellhus uses them as pawns to further his mission.

Kellhus believes that a great doom is coming to the world, and only he is capable of stopping it. He is able to think in the most rational way and spends much of his time meditating on all possible paths and outcomes. Once he has made his decision, he will pursue it with all the fervor of the most extreme zealot. Unfortunately, the best path to him appears to be the genocide of entire nations, and he doesn’t give us any insight into why this is a terrible necessity. As readers, we are left with a disquieting feeling, as sympathy turns to disgust.

To increase his military clout, Kellhus infiltrates a holy army, claiming he is a living prophet and using his powers to convince the masses. Once again, our villain becomes the focus of a religion movement. Using this army of believers, he leads terrible battles to conquer as much of the known world as he can, justifying the death and destruction he causes by claiming that only a united humanity stands a chance against the coming doom. His view apparently, is the only one that counts. There are two men who suspect Kellhus’s dark nature, and he does everything in his power to destroy them. The first, he drives mad; the second, he exiles and turns those who love him against him.

What is truly disturbing about Kellhus is that he is the logical end to being overly rational. He bears striking similarity to a cold and calculating computer, but with sufficient emotional maturity to manipulate and control people completely. Although he is human, his behavior is alien to the reader. He is a monster of unimaginable intelligence and cruelty. For this, Anasûrimbor Kellhus is one of the greatest possible villains.

Unlike the modern, ambiguous villain and “the big bad” mentioned in my previous article, the characters discussed here represent threats that cannot be overcome. Their powers are so foreign and explosive, their impact on me as the reader is visceral. My heart leapt, my lungs emptied when I read those stories. As much as I fear them, hate them, I admire them, not unlike the cult worshippers in these novels. Power is alluring regardless of the identity of its possessor, and heroes and villains are two sides of the same coin. While heroes are ubiquitous, I hope to see more books with superb villains in the future.
Posted by Jayson at 11:03 pm