The trend in modern fantasy leans towards painting a particular type of villain. If you think of some of the most popular novels around today, you will notice that many of their evildoers share a common feature: ambiguity. The modern villain is a fully fleshed out character with their own arc, and sometimes their own narration. The obvious example is the Lannister family of the Song of Ice and Fire series. Many would claim that they are not villains, but rather another group of players in the wide game. Great, villains have matured. And with this maturing, they become more sympathetic, less scary. With villains becoming increasingly accessible and commonplace, one has to ask: will the true villains go extinct?

Another type of our hero’s archenemy is what I’d like to call “the Big Bad”. The Big Bad is the kind of shadowy villain that has powers unheard of and will surely cause the demise of the world, but of course they aren’t ready yet and the hero needs to find out how to stop them! Tolkien’s Sauron is a prime example of The Big Bad: unimaginably powerful, but in the end, an extremely limited force in the novel. Because their power is so great, they never get a chance to use it, or the hero will die. This type of villain always feels flat and one-dimensional to me, designed to be knocked over by the protagonist at the end of the story. They rarely engage in their own story elements, and we never get to truly know them, or fear them.

So we have two main types of villains in today’s fantasy novels, and I have to ask: where have all the true villains gone? Sauron, while powerful, never does anything! And the ambiguous villain? Well, I like them! Tyrion and Cersei? They aren’t “true” villains really! Our insight into their choices allows us to sympathize with them, even when their choices are negative. So I have to ask again: where is the villain that fills me with dread? Where is the true monster?

Thankfully, there is a third type of villain. Though rare, they have the greatest impact on me as a reader. These villains are the genuine article. Let’s take a look at some of them.

Cthulhu – As seen in The Works of H.P. Lovecraft and Beyond 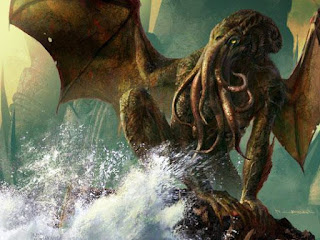 I must briefly address the octopus-er… elephant in the room. Cthulhu is the grand-daddy of the truly great villains. He is ageless, remorseless, and without pity. First appearing in The Call of Cthulhu, this monster is an interstellar creature bent on reaping humanity for those he serves. He is also the god of an earthly cult that has tried but in vain to revive him for centuries. As (worst) luck would have it, Cthulhu is awoken by accident. He rises from the dark waters and kills or drives mad those who disturbed his slumber, only to disappear moments later. Where Cthulhu has vanished to remains unknown, but his dread purpose is there for all to see. The reader is left with a quiet uneasiness. Everything about Cthulhu screams dread, for he is unknowable, vast, and monstrous.

But of course Cthulhu is monstrous; he is after all a monster, specifically from a horror story. But his influence is not to be ignored, and in fact, you will see many similar elements repeating elsewhere. In the next article, I will be talking about two modern villains that are cut from this same primordial ooze, one from a sci-fi series and one from a fantasy series. They both fill me with the same sense of dread that I associate with Cthulhu.