A few years ago, my friend Amanda sent me a link listing the “10 Debut Science Fiction and Fantasy Novels that Took the World by Storm”. At that time, I was working on what would become the book series for which Children of Lightning would be the prequel. The joy of the sci-fi/fantasy metaverse was a relatively recent discovery to me back then, and she thought the list would be a useful guide in my journey to geekdom.

The link became my entrance into the world of www.io9.com, a fantastic blog with a strange name. I scanned the book blurbs in the top ten list and emailed Amanda back. As always, she did not disappoint.

That informative article became the gateway drug for my downward slide into io9 addiction. Bi-monthly visits became weekly, then bi-weekly, and now, it is my favourite dessert after lunch. With food in my stomach, a cup of tea in my hands, I savour among others, the latest news on Game of Thrones, Doctor Who and most things Marvel.

Every now and then, io9 stretches my eyes, my world, a bit wider. Seeing something that was a liquid and a solid at the same time for the first time was an eyeful. So were some of the most ambitious Lego projects known to man. There was the ancient recipe of self-mummification concocted by Japanese monks, which, grossness aside, was brilliant.

I’ve bought books, and more books, because of io9, books that I would have missed in a bookstore. io9 is not just read by laymen like me, but by bona fide geeks who are as intelligent as they are amusing. Often, the comments sections are as informative and entertaining as the articles themselves.

My conversion to Saga’s fandom was a solo effort from io9. In addition to developing an anti-conventional plot of not having any hero, quest or mission, nothing is as beautifully drawn as Saga. Nothing. The way they hybridize the look of the characters is refreshing. Who would have thought of putting a CRT monitor on a human body and calling that a villain? The monitor is not just a gimmick. It displays the villain’s every dark and erotic fantasy when he is dreaming or losing his mind. That comic series is a joy to read. Saga has inspired me to come up with brand new hybrids for my story.

In io9, I’ve seen toys that money cannot buy. A father, determined to equip his child with all s/he needs to know for a blissful childhood has made this unique set of wood blocks. And no, he can’t make another set for sale. [Image below from io9] 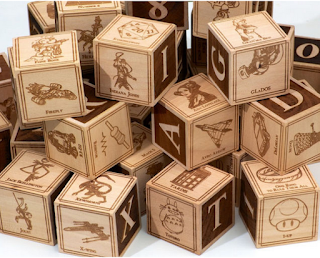 I watch CW’s iZombie based on the recommendation from io9. Unlike other zombies, these ones have style, eat brains served on a platter with sumptuous dose of culinary finesse, not unlike the dishes in an upscale restaurant menu. Basil Parietal Terrine, anyone? Want some Cerebellum Sashimi? Come to Meat Cute. The show is smart and silly. It doesn’t take itself too seriously, and it has got dialogue to die for.

To this day, I still haven’t read all the books in that top ten list that Amanda sent me, but I have read countless articles in io9 since. They have history, science, arts, all of them entertainment with a good dose of intelligence, insight mixed with a dash of TGIF-abandon. I am sure there are other sites that are just as important, but my path is crossed with io9. It makes the child in me giggle, the adult in me think. If it is a place, it’s where I want to live. If it is a person, he will be my best friend (with benefits, I’m sure).

Email ThisBlogThis!Share to TwitterShare to FacebookShare to Pinterest
Labels: io9

Newer Post Home
Subscribe to: Post Comments (Atom)
In case you’re wondering...
Cory, Norah, Fifi, Stars are the names of our imaginary friends.
Coryno rah fif istars, if spoken correctly, will unleash demons from a hidden portal in the lost city of Jun-K’zan.
C 0R YN0 RAHF 1F1 5TAR 5 is a mysterious code found at the end of every report sent from Nasa’s Voyager 1 from Apr 10, 1979 to Oct 13, 1987.
CORY-NORAH-FIFI-STARS is an anagram for Sci-Fi Horror Fantasy.